On this day three years ago, I sat in Dr. Juan Bernini’s office at Vannie E. Cook Jr. Children’s Cancer & Hematology Clinic as he told me and other family members that Andre, the cutest little 4-year-old boy in our world, had leukemia. He pointed to a screen 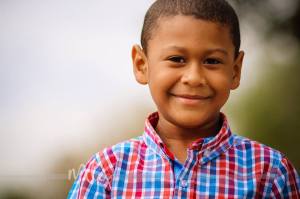 on a computer and showed us a cross-section of Andre’s blood cells and explained that, though further definitive blood results were still pending, the pictures gave him no doubt. Through our tears and shock, I recall that he pointed out the difference between the normal and cancer cells in the photos and explained how the cancer cells were winning the numbers game in Andre’s little body. I remember that there were a few cells on the screen that I recalled from photos in a book in a high school biology class. But there were many others on the screen I did not recognize. They were mismatched oddly shaped things that looked like they had no business in the human bloodstream. They looked like monsters.

Andre would need immediate hospitalization to begin treatment. There were no promises made.

I remember all that vividly now, but if you had asked me to recall what had happened in that first office meeting in the weeks after the diagnosis I would not have been able to tell you a damn thing about that day. Except for all of us walking out to the playroom where Andre was waiting and him seeing the look in our eyes and asking, “Am I sick?”.

He was sick. Very sick. He began what has been a long and grueling protocol of chemotherapy treatments that are standard for this disease. This wasn’t anything new to our family either. Andres mother, Alexandra, had leukemia at the same age just a couple of decades before. She beat the cancer and is doing well. I didn’t know what to make of that truth. I was stuck somewhere between the idea that if she beat it so can he, and the idea that asks what are the odds of both of them beating it? There is just something about children having to go through this that our brains cannot grip. We don’t understand why this happens and our thoughts become prisoners to our doubts, fears, and the utter helplessness that invade our lives. We enter a new and ugly reality that overtakes any reality we have known before. In this reality, we are always drowning. Always fighting to keep our head above water and make sense of it all. I am not sure that we ever do.

Throughout this 3-year journey, there has been a lot of pain and fear. Andre’s treatments are not without dangers and certainly not without pain. The first year involved several stays in the hospital. He suffered from terrible anxiety when he knew he needed to go in for treatment.When you have cancer your body fights both the disease and the treatment. They are both ugly. They can both kill you. Chemotherapy is the introduction of a deadly poison into the body. The hope is that cancer cells are more sensitive to the poison than the normal cells and the cancer cells die off. That is not always the case.

After the first year, Andre’s hospital visits lessened, and the treatment moved more to an oral-based chemo protocol with less frequent clinic visits. He would get sick often because of his compromised immunity and is always very restless after treatment. He fights constant battles with nausea and exhaustion. His bones always hurt. That is just part of his current reality. It is the same for all children with cancer.

But there is a harsher reality out there. One that even cancer patients and families don’t want to talk about. We don’t want to think about. So much so that I don’t even know the numbers myself. Nobody wants to think about it. I sure as hell don’t. But I do. We all do.

We have lost so many children along the way.

If affects you. Knowing that there are children out there dying of the same disease that your child has. Children you have met and talked to have died, and tomorrow there will be more. It numbs you. You know that could have been you. It does not escape your mind that it could still be you. You see and talk to people who have lost children and your heart sinks because there is nothing you can do. You don’t want to talk about it. You don’t want to because you might jinx it. Yes, you think in those terms. When someone asks you how your child is doing you don’t know what to say. What if you say he is doing well and then the next day he isn’t. Can you say that? We all know children who were doing well one day and the next day they weren’t. We don’t want to be them. We all have seen children finish protocol and have been declared free of disease, – and then they weren’t. Cancer has a vicious comeback record. It does not like vacations. It does not take time off.

I spoke to a friend of mine who works at the cancer center about this and he had this ugly piece of truth about it.

It was that simple.

He said that it doesn’t matter how well or bad you did in treatment. There is no pattern to it. He has seen patients cancer-free for years after treatment and still suffer a setback. You just must be vigilant. You must treat the disease. You must keep fighting. He says that advances are made every day in the treatments and protocols are updated all the time because of everything we learn along the way.

So here we are in the third year of treatment for Andre. We treat the disease. We are vigilant. We fight the good fight and we pray for all those fighting with us. We keep in our hearts the families of those we have lost along the way, and not just because there by the grace of God we go, but because we love them.

And love is the only thing cancer can’t take from us.

6 thoughts on “We fight the good fight”

Follow The Detective and The Case of the Missing Lol on WordPress.com
Join 702 other followers