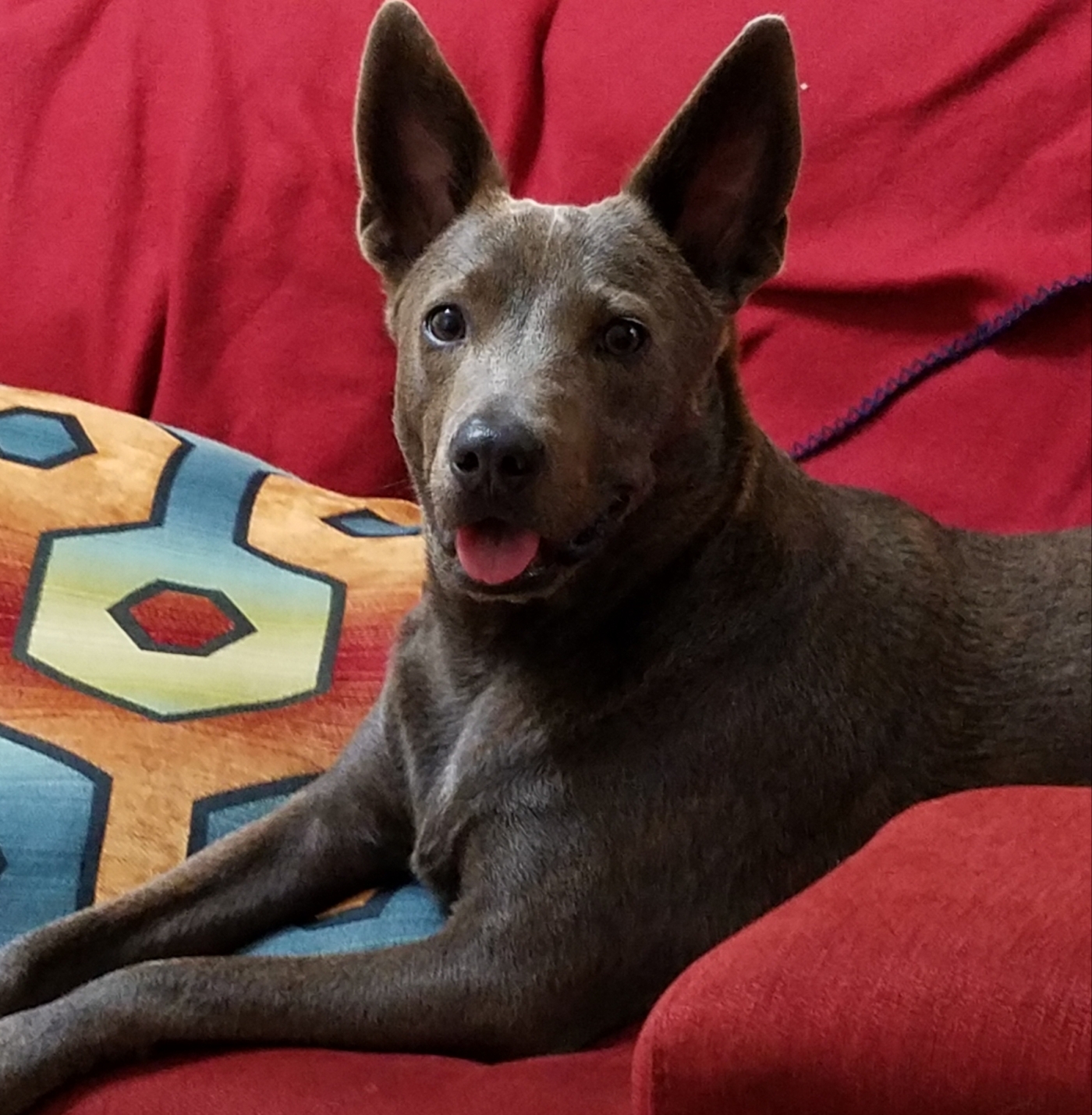 Sometimes I look at Blue and wonder where he came from. The dog shelter said he was a stray, but couldn’t tell us where he was picked up. They only had him for about a month or so when we adopted him and guessed his age at a year old. He was labeled as a “shepherd mix” and someone at the shelter named him Blue. Before that he was at another shelter where they hold them for a month before moving to the adoption shelter (after they deemed them adoptable, most are not). So I wonder how long he was on the street as a stray? I don’t think it could have been too long. He was house trained when they took him in. No collar or chip made it impossible to find an owner. But there had to be one out there. He knew his way around the inside of a home way too easily to have never lived in one. 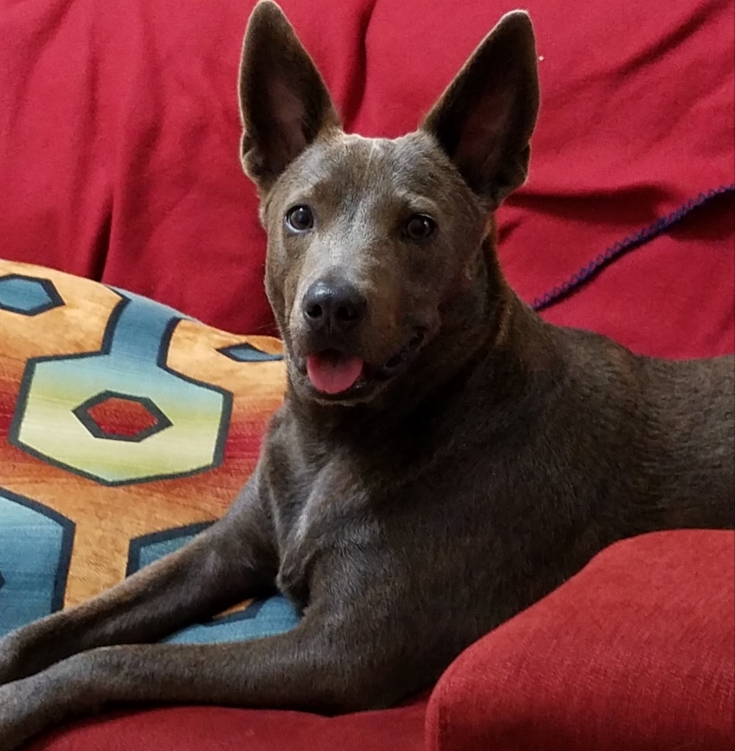 Within moments after taking him in, he staked out his spot on the sofa and on Lauren’s bed. He then immediately went under the table looking for food that may have been dropped during lunch. He checked every room, clearing them for other pets I suspect, then sat down to watch TV on his spot on the sofa. From day one he knew to walk to the door when he needed to go do his business. Yeah, he lived with someone else once. I wonder if they miss him.

My daughter Lauren always says “I wonder how he was when he was little?”.  He surely must have been a cute puppy. Granted, at one year old he is still a puppy, but one has to

wonder what kind of a furball he was like when he was very little. I guess all puppies are cute. But we didn’t have the fortune of knowing Blue as a baby. We have no baby pictures of him. If he had brothers and sisters we don’t know about it. He must have a family somewhere. I also wonder what he remembers about them. Would he recognize them if he saw them?

I remember picking Blue out at the dog shelter. He was in a cage with a Chihuahua dressed in Mexican pancho (I’m gonna call him Paco, Lauren says that’s racist). The Chihuahua was yapping away at us. Blue just stood there looking back at forth between us and Paco. Probably wondering if we knew where the off button on Paco was. But whatever Blue was thinking, I am not sure he was thinking of leaving with us. As I remember it, we picked Blue, he didn’t pick us. I wonder sometimes if he was waiting for someone else. Was he missing someone that was missing him? Was he expecting that someone to come and get him?

It was few weeks after we got him that I first heard Blue bark. He whimpered here and there when he saw people or other dogs during out walks, but he never barked. The first

thing he ever barked at was a dry shampoo spray I got for him. I came up to him from the side and with the spray and sat next to him. He saw the bottle in my hand and jumped 2 feet in the air like crazy cats do. He then ran around the sofa and hid behind one of corners, growling while he stuck his head out and looked at me. I edge toward him and he let out his first bark. No spray bottles. Got it.

I recently got to know a neighbor who is also a dog lover. He has a gorgeous dog that he also takes for walks, and we run into each other once in a while. His dog kind of reminds me of Blue. Well, except his dog sits, rolls over, stays, heels, fetches, and can probably get a beer from the fridge on command and open it for you. Blue, under the right conditions, can lick his own face on command. The right conditions being me putting a spoonful of peanut butter on his nose. Anyway, as I was saying, the neighbors dog is named “Mission”, for the city he was found in as a stray. He also has an unknown history. My neighbor (I would name him, but I suspect he is in the witness protection program, you didn’t hear that from me) said that once they drove into a local Wal-Mart parking lot and the dog went all crazy. He found out later that the parking lot is where his dog had been found. Had he been abandoned there? Did he live there for a while? Who knows? All I know is that Mission has a good family. And that is a good thing. Most dogs are not that lucky.

There are way too many animals out on the street without a good home. If you want a dog, go to the shelter and find one. These dogs at the shelters have no where without you. Most aren’t puppies anymore. They’ve been around. They have an unknown history like Blue. But you can change all that and give the dog their last permanent history. All dogs deserve a good forever home. 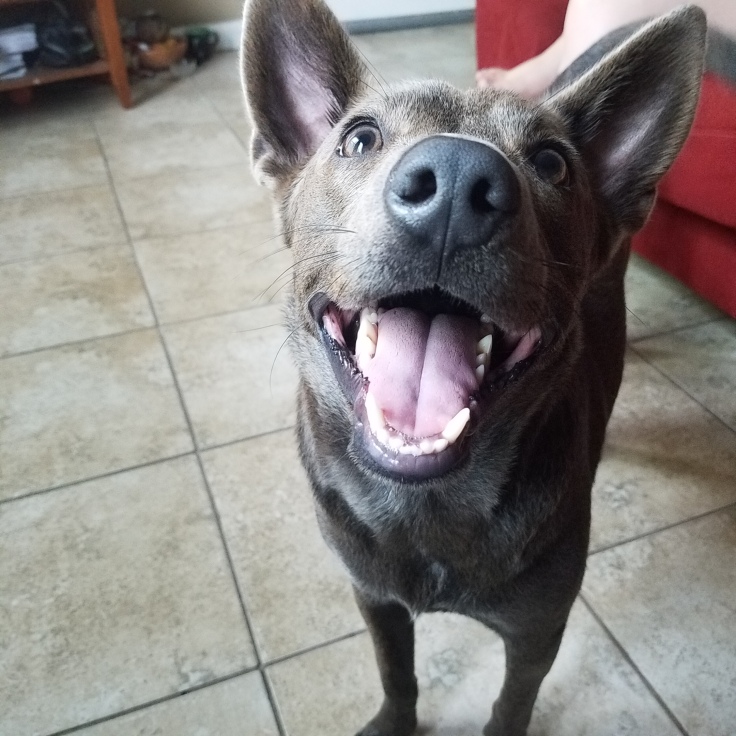 And Blue? I suspect Blue would tell you “I could do worse.” Sure, I don’t know his history, but his future doesn’t look too bad.  And he probably could do worse, and even a little better. Just kidding, he lives like a king. I can’t wait till his birthday. I’m gonna get him a big case of spray bottles all tied up in big green balloons. He’ll love it.