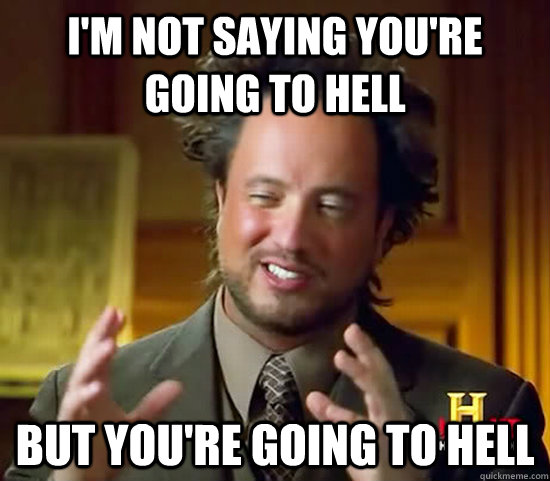 Not long ago I saw a movie called Walter. It was about a guy who thought he

was given the authority to decide who would go to heaven or hell after they die. Well, today I am Walter. Here is my top ten list of those people that are going to hell. Make sure and check to see if you are on it.

This is not the permanent list. If you have any questions regarding your placement on the list feel free to ask me.  There is some wiggle room for negotiation. Wink, wink.

#1 The guy that invented the Burpee.

I once started working out in a Cross Fit program. I even asked my doctor if I should and he said, “Sure, they send a lot of work my way.” But there was some kind of special going on and I did it anyway. It wasn’t terrible. I understood the concept and could handle the exercises.

Except for the burpee. What in the freaking world would have to possess someone to come up with this exercise? I personally think some trainer in a gym accidentally fell while everybody was watching, so he pretended he did it on purpose to do a push up and then jumped back up trying to act cool. He then told everyone it was new exercise and it caught on.  I thought it was stupid. It so happens this particular gym I was in believed in the burpee like I believed in the Big Mac, so I had to leave. Stupid name too. Based on what heard in that gym during those exercises they just should have called it the Fartee.

#2 The guy that invented dodge ball and tether ball

I can’t confirm that it was the same guy who invented both of these games. But in the first one people hit you with a ball, and in the other one you hit a ball and it hits you right back (well it did me). I can’t accept that it was 2 different geniuses who did this. These were games invented by an asshole (I try not to be vulgar, but I also try to use the best possible word to accurately describe something. Trust me, this one is it.) Whoever invented these games and made sure it was some kind of rule that all kids in elementary have to play it during gym class deserves his own special spot in hell. I’m sure whoever invented this game is already dead and burning in hell as we speak. Good riddance.

#3 That guy that switched from Verizon to Sprint 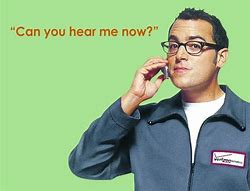 This guy has no moral fiber whatsoever. Some big company pays you a shitload of money to be their spokesman, and then, years later a competitor of theirs pays you a shitload of money to take it all back and talk shit about them. This is just so wrong. You might as well just be Trump’s press secretary. I swear if I see him in the future on a T-Mobile commercial I will personally become a sniper and take him out myself.

#4. That girl from the Latuda commercial.

I loved her. I really did. I have loved her since I first saw her in the Latuda commercial (some drug for depression and other stuff). I wanted to find her and save her from that, but the people from marketing who developed Latuda never returned my calls or email.. I thought for awhile that they were just trying to keep us apart. The truth was even darker than that. 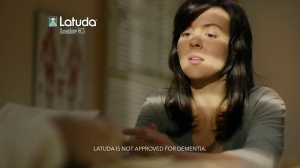 commercial for a drug called Lyrica. I thought to myself that this poor girl not only suffered from depression, but now she has also developed Fibromyalgia! I was crushed. I knew I had to find her and save her.

I found her. Turns out she’s just an actress. She’s not sick at all and she doesn’t need me to save her from anything. I am devastated. I loved her. She lied to me.  She’s dead to me now. That’s all I have to say about that.

#5 Anyone that has ever worked as press secretary for Trump

Sorry. I did not want to get political. I don’t dislike people because of their politics. I like Trump, just not as POTUS. But everybody knew he was a dumb lying bastard and voted for him anyway. That’s on them.

Now I can lie as good as the next guy, probably better. Just ask any of my ex-girlfriends, wives, or anybody I ever took a confession from. But Jesus H. Christ there is no way I could lie like these people! I don’t mind people lying to me. I expect it. I do mind when they lie to me, and they know I know they are lying to me, and they keep doing it. What’s worse in this particular case is that my tax dollars are paying them to lie to me. They have no shame.

#6 That guy from McDonalds who decided that McDonald’s would no longer carry Hot Mustard sauce for their chicken nuggets. 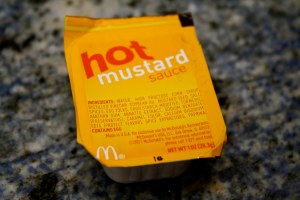 what they  could cut back on or improve in order to increase sales. A lot of good things came out of this, but with one big draw back. Some idiot (I know who you are) sent a memo to the head honchos at McDonalds and told them that Hot Mustard was outdated and needed to go. The memo also said that people would buy more nuggets if a greater variety of sauces were available.

Of course no one cleared this with me, or, at least, Cc’d me on that memo. I had to learn of this at the drive thru. At the fricken drive thru! All I remember is sitting there while this high school kid with braces and a pony tail says (cue the slow motion deep male voice here), “We don’t make Hot Mustard anymore“. I think I passed out for a second because the next thing I remembered was cars honking behind me, and the manager nudging my shoulder asking me if I was alright. After I confirmed with him that it was true, I called a guy. And by “a guy” I meant a friend of mine that worked at a McDonald’s across town. He, of course, had received a memo and had predicted this might happen. He had stashed a case of Hot Mustard at his house. For the next 3 months he was my new best friend.

I think that day could have easily been one of the days in your life where you judge things in your life as having happened “before” this or “after’ this. I was spared that.

Lucky for me the people (that’s you guys)  revolted and Hot Mustard was brought back in all of it’s original glory (not that stupid Honey Mustard crap). Tragedy averted. But I still remember that day and realize how all our lives could have been different if people had not stood up and made their voice heard.

What are you special? You’re too good to pick your own dog’s poop?

I swear to you that the veteran and I will stake out on my balcony and take you out the next time that happens. And I don’t mean take you out for dinner and drinks.

Pick up the damn poop!

#9 Anybody with the nick name “Papi Chulo”.

This one is self explanatory.

#10 And finally, all those people who are rude to their waiters and waitresses, can’t park their car to save their life, put their feet up on the seats in front of them at the movies, park in a handicap zone when they aren’t handicapped, and talk on the their cell phones using their speaker phone in public.

Stop it. Just stop it people. You’re very soul is at stake.

I hope all of you are having a great day. And I hope all my writer friends go out and find the right words today.

5 thoughts on “The top 10 people that are going straight to hell when they die.”